So I’m having a discussion with reader “Ryan” about whether certain aspects of the rap industry are fake or whether rap is “real” theater..

I’m making a point about how kids listen to rap music written by wealthy guys who live in mansions and who also happen to be movie and television stars, yet they write about bussin’ gats and being on the corner all the time.. where you never see them unless it’s a music video shoot location and their off-duty-cop bodyguards are standing right next to them with vests on and carrying licensed weapons……

And somehow, I was reminded of the makeup industry.

Amongst other curvy aspects of the female form, I like cute girls (women, gals, whatever y’all like to call yourselves). I like girls that I enjoy looking at ‘fresh out the box’.

Maybe that’s natural, maybe I picked it up during college. I went to school with a bunch of brainiac chicks, so the time that would have been spent on hooking up their hair and doing makeup was spent STUDYING, EATING and SLEEPING.

When I’d roll up to that 8:30am class, there they were, in whatever they happened to throw on in between the time that they woke up and when they arrived at the classroom. Flannel shirts, sweatpants, boots or sneakers, jeans, hair approximately the way it looked when they rolled out of bed.

On the weekends, of course, it was a different story, as they had to get themselves Jiggy-Fresh to go shopping downtown and go to parties in the evenings.

This makes sense to me because everybody wants to put their best foot forward when they go out socializing. You never know who you’re going to meet that you might like to kick it with and you never know when there are going to be photo ops.

What *DOESN’T* make sense is how the industry’s brainwashed some of y’all chicks into falling for the Okey-Doke. I know some chicks that look perfectly cute as-is, yet they swear they look HORRIBLE until they draw something on their faces.

Don’t get me wrong… There are lots of horrible-looking women. 😀

What I’m saying is that it’s strange and fascinating to see gals that have ZERO confidence in their looks before putting on makeup and then feel like life is grand after they hook their grills up.

There are two types of makeup addicts.

There are some women that spend their time putting on makeup and then when they ask you how their makeup looks, you’re like “You put on makeup? o_O”.

Of course.. You don’t actually want to SAY that, just like you don’t want to compliment a woman by comparing her clothing selection to a donut. Instead, just be prepared to say “You look fine, dear”.

That should end the conversation, but just in case it doesn’t.. If she asks you what you like about how she did her makeup, say “It makes me focus on your eyes more”. The other type of makeup junkie is the chick that looks like a totally different person after she, quite literally, “puts her face on”.

Like, you wouldn’t be able to pick her out in a lineup if she committed a crime with her makeup on and then you saw her at the precinct without it.

That doesn’t necessarily mean she’s facially unattractive without her makeup on, just that she looks like someone else, entirely.

I’m guessing the effect would be similar to seeing Snooki in whatever natural color her skin actually is, instead of Jersey Spray-Tan Orange.

I mean.. I suppose there isn’t anything wrong with looking like you came to the supermarket directly from the nightclub, or as Gail from Jerseylicious would put it.. the “Disco” (hehehe), but I can’t imagine that consistently having your face covered in paint would be good for your skin, or your overall health.

What Can We Say?

Whether the gal in question’s face changed dramatically or didn’t change at all, you can’t afford to say that she looks BETTER now that she did her makeup. You don’t want her to become even MORE self-conscious about her grill, thinking that you don’t like how she looks unless she’s made up.

Some gals take it so far that they attempt to NEVER be seen by a guy unless they have their makeup on. Again.. This is a smart tactic for SOME women, 😀 but a lot of them that don’t actually need makeup went out like this as well.

Whether or not you tell a woman she looks worse with her makeup done depends on which is more important to you.. your public image or getting laid.

Personally, I stick with “public image”. You can always find more chicks that are DTF, but you might never live down that one Facebook picture you took with the ridiculous-looking chick that painted her face all different colors like a circus clown.

That’s why it’s better to just say “Nah, Nah.. You look ridiculous. Go back and try again.” and let the chips fall where they may.

If she doesn’t want to go out with you, that’s good.. She can go embarrass someone else tonight, and your rep remains intact.

If she’s smart, she’ll recognize you as an authority as far as knowing when women look good and when they look ridiculous and she’ll go back to the drawing board, feeling appreciative that you did her that solid of not letting her embarrass herself in public (and YOU in the process).

This also applies to when y’all are already out on the town and those black circles they like to paint around their eyes begin to devolve into something resembling a raccoon.

It’s better for you to let her know she’s not on-point than to let her get caught slippin’ on the paparazzi tip. 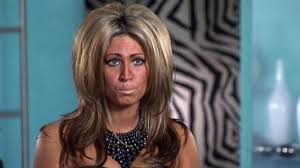 By The Way.. This goes for her hair as well.

If it looks like she’s carrying her dog on her head instead of in a bag (I know that sounds stupid, but for some odd reason, women in NYC buy dogs and then carry them around in bags. I don’t understand this either, \o/. It just makes more sense at this point in time to say “instead of in a bag” than “instead of walking it on a leash”), it’s better to let her know instead of handing the fellaz free tickets to tell jokes about how you’re dating Peg Bundy all night long.

How Can We Help?

It would seem that the obvious way to assist in their eventual & gradual recovery would be to find times when they definitely don’t have makeup on and tell them they look pretty. Unfortunately, instead of going “He knows what he’s talking about, so I’ll graciously accept his compliment! :D”, they go “Damn.. I thought he had better taste in women! :/”.

Since they already know FOR SURE that they look busted without their makeup, it’s obvious to them that YOU don’t know what you’re talking about.

Maybe you could arrange a field trip… If you know your girl is cute and she’s wasting her money on makeup (as well as valuable time that y’all could be hooking up), figure out a way to get her to come with you, somewhere… ANYWHERE!… without wearing her makeup the entire day. Make sure it’s a location that has lots of people, like a shopping complex of outlet stores, or maybe a beach or public pool (don’t get *IN* that water, though! HAHA). The more she interacts with people and notices that they’re being pleasant towards her without recoiling in horror upon laying eyes on her natural grill, maybe she’ll get the picture and start easing up on the unnecessary war paint.

This stuff is really deeply ingrained, and I really don’t have any clues about what to do, other than taking pictures and then showing them how they look.. which they should have seen already, because they were using a MIRROR to do their makeup. If you have any ideas or you know something that definitely worked in this situation, tell me about it in the comments section, below.

All I know is that some of y’all gals CLEARLY don’t need makeup and are very nice to look at, as-is, just rolled out of bed, fell off the turnip truck, just finished doing yoga or pilates, whatever.

Try giving yourselves a break, and if you can’t do that, try reaching out to one of your sistahs in need. Tell her “Nah.. Nah… Put that brush down. You don’t need that. You’re pretty already! :D”.

Best-Case Scenario, you’ll help out a friend and feel better about yourself as a person. 🙂

Worst-Case Scenario, you’ll get the rap to some fly guy because you had makeup on and she didn’t. 😉
—