Google Plus Circles are basically what I’ve been waiting for for quite a long time, now.

Here’s the video from Google that basically explains what they are:

That’s all well & good, and it gives you a basic understanding of what you can do with circles, but if you’re “Internet Famous” or even just a power-user of social media sites, you’re going to need a better plan than “I CAN SHARE MY PARTY PHOTOS WITH MY COLLEGE FRIENDS!!! 😀 LULZ LOL FTW F2F IRL!!! :D”

“My College Friends” will quickly become a useless category to you if you have a whole lot of college friends.

This is because your college friends are all INDIVIDUALS and don’t have the same interests and don’t share the same quality of content and aren’t interested in the same topics. o_O

Wait.. Let me back up a little…

The reason I’m talking about this is because I’m popular In Real Life (otherwise known as “IRL”). Most people on the internet are not.

In fact, before Twitter, most people that you see with a lot of followers never had anyone listen to anything they had to say ever in life, which is why the service is so popular. You get to feel like thousands of people are listening to what you have to say. You feel popular. You feel interesting.

Meanwhile, I’ve been managing groups of followers since my earliest recorded memories, around Kindergarten (5 years old, in the United States of America). Almost two weeks ago, before I received an invite to Google+ from my friend Jeffrey Taylor, I had never heard of it.

I had never heard of it and I wasn’t even checkin’ for Google as far as social stuff after Wave was WACK and Buzz was WACK, I had pretty much had it with their attempts at social.

I started out using circles the way the video tells you to.. Grouping people by level of acquaintance or things you appear to have in common.

It became obvious, relatively quickly, that this wasn’t the way to go.

I hopped on Google+’s “Hangout” feature (no-cost group video chat for up to ten people) and had a brainstorming session with my friend Baratunde.

Baratunde’s an actual comedian. He’s an entertainer. I have fans, but he has *FANS*. I wanted to know what he was planning to deal with “circles”. He spoke on his thoughts about circles in this public Google+ post, entitled “Will Google Plus let me hang out with Halle Berry?”.

One of the things we discussed in that conversation was that circles needed to be concentric, not mutually exclusive. For example.. I might go to a blip.tv party, and there could easily be 60-80 people that I personally know in the same room.

That doesn’t mean that we all share the same level of friendship, as Facebook would have us believe.

That doesn’t mean we all share the same depth of conversation, interaction or intimacy with each other.

That blip party isn’t a bunch of separate, mutually-exclusive parties.

It’s one large party which contains many, many sets of varying levels of relationships which intermingle with each other during the evening.

Some of your IRL friends are also your coworkers.

Some of your coworkers are your girlfriends. >:D

Some of your girlfriends also like hiking or web design or debating dating situations.

If you group people the way you’re told to, you’re gonna get screwed, because you’re mixing people with differing qualities of content creation.

You’re going to end up with too much noise and not enough signal, and then you’re going to have to write blog posts about how your wife bounced from Google+ because she couldn’t take it anymore.

So.. The first thing you have to know in order to do it properly, is that you need to set up two different hierarchies of circles:

I have people that I’m actual IRL friends with and I enjoy clinking brews with them at the bar and I totally enjoy their company in person, but the internet content they post is absolute DRIVEL! 😀

It’s complete garbage. I’m not trying to hear that. In fact.. I’m not even trying to have to scroll past that while I’m looking through interesting, relevant material.

If I made a circle called “Good Friends Of Mine”, it would be populated with garbage.

Fortunately, Google+ enables us to *IMMEDIATELY* promote and demote people in pretty much less than two seconds.

As soon as you see something that disturbs your reading experience, you hover over their name and get “Add to circles”, then hover over that and either demote them or remove them from your circles entirely. No muss, No fuss! >:D

After almost two weeks of dealing with content quality interruptions, I realized that the way to go is grouping people by the quality of their content… IIIIIIII HAVE A DREEEEEEAM… THAT ONE DAYYYY…

So that’s your first set.. Your hierarchy of Listening Circles, grouped in order by quality of content.

What this allows you to do is cascade down levels of relevance.

First, you click on your circle that includes people that you always want to hear from.

This circle is valuable because Google+ moves very quickly, like Twitter does. If you don’t have a circle where you can find things posted hours ago or even days ago from the people you REALLY want to keep up with, you’ll never be able to find them if they’re mixed in with a bunch of other people’s content.

Once you’re up-to-date with the important posts, click on the circle of people that always have something relevant, intelligent, intelligently humorous, insightful or important to say.

This is where you’re going to experience your first round of demotions. 🙂 SOMEBODY in this list is going to disappoint you with drivel and get demoted to a lesser ring.

Next, check the circle with people that post good material, but it’s leaning towards leisure-time reading.

This is where you’re going to experience your first round of promotions. Some people are going to surprise you with insight or relevance, and you’re going to want them to be in a higher-priority circle next time you do this. 🙂

If you want to do Pot Luck, you click on “Stream” in your sidebar, and you can see material in chronological order from everybody in all of your circles.

“My College Friends” don’t all care about the music you’re working on or your business connections or actually *ANY* one particular topic you might feel like posting about on the internet.

You have to develop lists, groups, sets, circles, whatever, of Passionate Consumers of whatever your blog topic was.

If you post about social media, add the people that +1 or contribute thoughts to that thread to your Social Media Sharing Circle. Same thing if you post about dating or video production or whatever else you normally like to discuss online.

What you end up with is people in overlapping circles which work efficiently in the same way that your IRL interactions with people work. You hear what you want to hear from people when you want to hear it, and you tell (to a degree) people about what they’re likely to want to hear about.

Of course, you can block people for making inane comments in your thread, but I’m more of a Prevention person than a Cure person, Nah Meen? >:D

The third set of circles you’re going to need, well, if you’re the type of person to take advantage of group video chatting, that is.. is Hangout Circles. 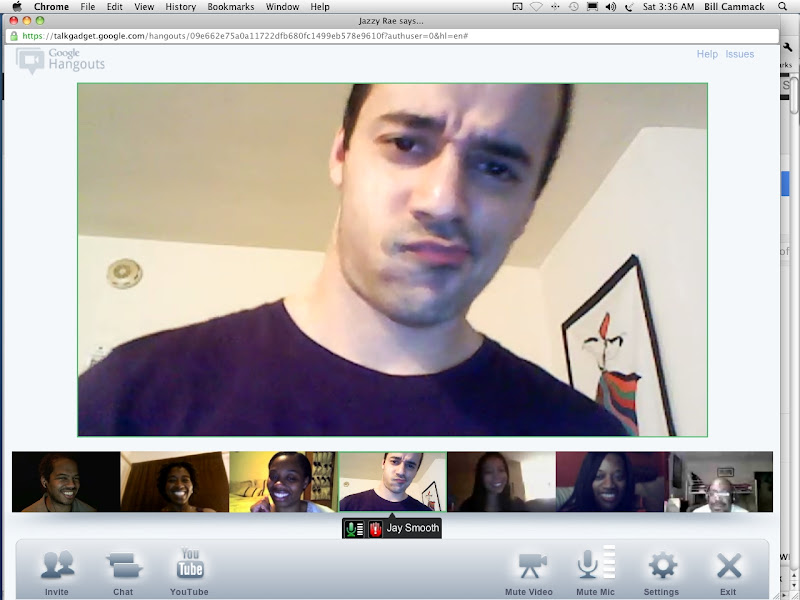 A Google+ Hangout is a video chat between anywhere from 2 – 10 people.

well… unless you do it like Facebook press conferences and have 10 people bum rush the show on the same video camera.. then, I guess, hypothetically, A Google+ video chat fits up to 100 people. 😛

Group Video Chatting is definitely the move, but the quality level depends on the people that you get to join the chat.

When you create it, you have the option of sharing the invitation with individuals or circles (or extended circles or “public”).

If you don’t curate your hangout circles, you’re going to end up with pot luck, which may or may not go well for you.

On top of that, if you have thousands of followers, there are only 10 slots to begin with. It doesn’t make sense to invite 900 people to something like that.

What you need to do is either get your set of 10 people together ahead of time, perhaps using a Facebook Event, since Google+ doesn’t have Events yet, or at least get a core of people together where you know you’re going to have a good conversation once you invite more of your circles to the hangout.

There are way more issues with hangouts that I’ll talk about in another post, but essentially, to me, hangouts are the killer app to Google+.

The only reason I haven’t logged more hangout hours already is that I’ve been focused on figuring out circles.

Google+ is still in a closed format they call a Limited Field Trial, but you should be able to join up at plus.google.com/up/start/ pretty soon.

Most of what I said isn’t going to be useful to you if you know like 49 people, total. 🙂

In fact, most people didn’t bother to read this far, and they really don’t need to.

The people that need to read this are those of us that experience diminishing returns from social media sites because they eventually become popular.

Foursquare was very useful before it became a fad to be connected to people on that particular LBS (location-based service). As soon as the civilians found out about it and were able to add people they already followed on Twitter and Facebook, we had to make a choice between being sociable and using the service for its intended purpose.

Google+ Circles are a good way to deal with posting private and public content from the same account.. Private, meaning sent to people you specifically want to get that communication, not Private as in “Let me send this chick a picture of tha dilznick and get fired from my job.”

I think a lot of people are going to bounce from the service because they’ll feel like it’s Twitter with the 140 character restriction removed.

That’s pretty much what Jaiku was, back in the day.

Google+ is a new game, altogether. It’s an incredible time sink because there’s so much information (though, granted, a lot of it’s reduntant reposting) that you receive from so many people, and then you can actually follow the conversations connected to that content.

It’s not going to be for everybody. Trolls will probably have no presence on G+ at all, especially since their accounts are linked to their government names, like profiles.google.com/BillCammack and they’re not going to be able to hide behind fancy screen names and try to act disrespectfully.

Lurkers will be there, silent in the background, as usual. Google+ is the opportunity for ACTUAL thought leaders and aggressive debaters to shine.

The time is NOW! >:D Skynet has been activated. The online and offline worlds have been brought one critical step closer to each other. If you have your listening circles and sharing circles set up properly, you’ll thrive in this environment.

If not, you’ll suffer through a flood of minutiae and drivel from cat-picture and animated .GIF posters and decide that Google+ isn’t worth anything to you socially.