“Bros Before Hoes” is generally misinterpreted to mean that anybody who is male gets preferential treatment in any situation where he’s in active or passive competition with a female.

An example of this is this 2008 election t-shirt design featuring Joe Biden and Sarah Palin:

This is not actually what Bros Before Hoes means, or what it stands for.

Before I get into the actual explanation, I’d like to say for the record that females have their own slogan for Girl Code, which is “Chicks Before Dicks”.

This is because, in general, males and females are not friends.

In fact, other than attempting to get laid, there are some guys that never speak to women at all.. unless they have to, like for some work project or something.

On the other side of the coin, there are some women that have no male friends at all either.. of their own choice and decision, not because girls don’t have friends that are guys.. That’s an entirely separate issue.

Meanwhile, Political Correctness would have you believe that we’re all one big androgynous melting pot. That’s not true.

Women often find this out the hard way… They think some dude is their friend, and then they announce to him that they’re not going to have sex with him and he vanishes into thin air like The Great Gazoo. 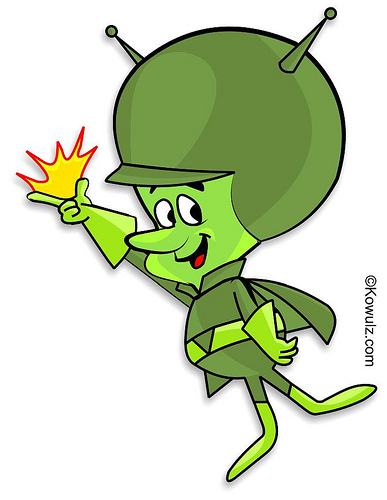 The Great Gazoo is a tiny, green, floating alien who was exiled to Earth from his home planet Zetox as punishment for having invented a doomsday machine, a weapon of immense destructive power.

His invention was a button which would destroy the universe if pressed, though he insists he made it on a whim with no intent of using it.

Gazoo was discovered by Fred and Barney when his flying saucer crashed.

*POOF* She never hears from him again, because the only reason he was speaking to her was so he could get laid.

This works in the other direction as well.. Guys will remain in the pocket and play that “friend” role until a chick announces that she’s broken up with her boyfriend, and then here come the suitors out of the woodwork, talkin’ ’bout how much they want to hit it, yadda yadda, when this whole time, they’ve been layin’ up in the cut, waiting for their turn to tap that ass.

So, what you end up with in this society is a group that seems to be based on equality, but it isn’t… Some people, including guys<->gals are actual friends, homies, home-skillets, like, they have a REAL relationship…. Other people are only allowed to remain in position as long as they remain functionally useful, and they’re often quickly and unceremoniously replaced.

This is the *actual* genesis of Bros Before Hoes.

In the authentic application of the concept, a guy might have male “bros” and also female “bros”. The actual differentiation is how much the individual is valued as a person, and whether they’re considered a first class citizen, *NOT* whether they’re male or female.

For example.. Back in the day, guys would bring chicks around and introduce them to us as their girlfriend or “wifey” or whatever… I would play along with the game and interact with these gals as if they were going to be recurring characters in our lives.

In fact, I already knew that they were NPC’s (Non-Player Characters). In a movie, they would be considered “extras”. They’re in the movie, and you see them in the coffee shop, but they don’t have any lines and may or may not get their name in the credits at the end of the film.

The funny/backwards aspect of situations like that is that these NPC’s would swear up and down that they were pivotal, important people, and make statements and demands as if they were in some type of powerful position. 😀

Next thing you know, some other chick was being brought around by that same dude, introduced with the exact same title, and treated exactly the same way by tha fellaz.

No ceremony. No problem. No beef. No gradual or sudden dissolution of the relationship.. The previous chick would just disappear into thin air like The Great Gazoo, and she may or may not ever be mentioned again, ever in life.

If the story of her ejection was funny enough or interesting or educational enough, it might be told to the crew. Other than that, she was just replaced, and it was regular and no big deal and the next one up on deck got light until she disappeared also.

So, the actual meaning behind Bros Before Hoes is that if a dispute occurs involving a first class citizen (bro, male or female) and a second class citizen (ho, female), it’s in your best interest to side with the person who was your friend beforehand and will be your friend after the fact, instead of siding with the chick you happen to be screwing at this particular point in time, because you’re going to replace her with another one if she bounces.

Technically, this should work the same way in reverse, meaning:

The actual meaning behind Chicks Before Dicks is that if a dispute occurs involving a first class citizen (chick, female or male) and a second class citizen (dick, male), it’s in your best interest to side with the person who was your friend beforehand and will be your friend after the fact, instead of siding with the dude you happen to be receiving tha dilznick from at this particular point in time, because you’re going to replace him with another one if he bounces.

Most of the time, if you’re a friend of a chick and attempt to persuade her against the guy that’s currently hittin’ her off, you’re going to run into major resistance and might even get removed from her roster of friends.

This is why, when women don’t have any sex in their lives, they’re all content to hang out with a bunch of other women all the time, and then, AS SOOOOOOON as some guy’s willing to hit it, they bounce from “Girls’ Night Out” faster than Tea Party Debate audience members would let a 30-year-old without health insurance die.

So.. Since women’s emotional attachment to sex clouds their judgement, Chicks Before Dicks (Girl Code) isn’t as strictly adhered to as Guy Code.

There’s really no way around this… My advice to you is that if you have something negative to say to a female friend of yours regarding her source of sexual satisfaction, you’d better have as much concrete evidence as you can muster before you even bother to bring it up. 😀

There aren’t a lot of Female Bros. This is because, like I said earlier, a lot of guys don’t even talk to women unless they’re trying to screw them, and then, as soon as it’s determined that they can’t get any, the guy stops talking to them, because what’s the point of that? \o/

However, these situations occur.. Mostly through getting to know women through work or social media or through mutual friends or the chick used to date your homeboy or whatever.

When this happens, these relationships as real as they come.

A lot of people fail to perceive male<->female Bro relationships, because they don’t believe they exist.. like The Great Gazoo. This leads to serious miscalculations on their part, when they incorrectly apply “Bros Before Hoes” to a social situation.

If I’m chillin’ with a female Bro and she spies a guy she likes, I’m going to try to faciliate her getting laid (or whatever she’s trying to do with him), just like I would for some male homeboy of mine I happened to be chillin’ with that saw a chick he wanted.

Also, if I see something that I feel shouldn’t be happening to her, I’m gonna back *her* play, not the play of the dude that’s trying to get over.

This is entirely different from cockblocking… I’m not on the payroll. I’m not paid to babysit some grown-ass woman from giving it up to some dude.

As long as what he’s doing is on the up-and-up, I’ll let him rock. If he can talk her panties off or whatever, good for him, I hope he enjoys himself! >:D

However.. If I feel like the situation isn’t proper, I’m going to check with her.. *ESPECIALLY* if the only reason she’s where we are is because she agreed to come somewhere with me… If I’m the reason she left her house, I’m going to make sure she returns to her house safely. Period. I don’t give a flying **** what anybody thinks about that. It’s what’s happening.

There are too many guys and gals in this town that leave chicks laying around in the garbage… Not on *MY* watch.

I wanted to clear this up because there are a bunch of clowns running around on “reality” shows claiming Guy Code when they really have no integrity whatsoever.

They’re making guys look like chumps by claiming Guy Code and then snitching on their so-called boy to his girlfriend about something he did or deliberately gossiping or instigating unnecessary conflict.

It’s even worse when their adherence to Guy Code only lasts as long as they don’t have a chick to climb up on, and as soon as they achieve that, they become one of the girls.

In fact, guys like this don’t have *ANY* Bros, whatsoever. They’re mercenaries. They’re out for self. Dolo. Just because they’re male doesn’t mean they have any legitimate claim to raise their glass in the club and yell “BROS BEFORE HOOOOOOOES!!! >:D”.

Dudes like that make things tougher for the rest of us, since women attribute their ridiculous behavior to guys in general.

Since these dudes ARE NOT authentically down with Guy Code, they make the rest of us look shabby by snitching on their boys, not backing up their girls, and siding with second class citizens over first class citizens so they can get some trim one time in life.

Don’t play yourself by assuming you’re automatically considered a first class citizen due to accident of birth.
—