Long-time reader, and good friend of mine, “Fishingrod” asked me for my predictions for the Florida Republican Primary that’s coming up tomorrow (Tuesday).

In fact, I hadn’t even thought to write about it, because it’s hardly a “prediction”, as the situation has stabilized at this point, but let me talk about the WHY rather than the WHAT.

The order tomorrow is going to be Romney, Gingrich, Santorum, Paul.

This is already evident by the polls, which have Romney leading Gingrich by anywhere between 5 and 20 percentage points, like meaning 43% Romney, 29% Gingrich. 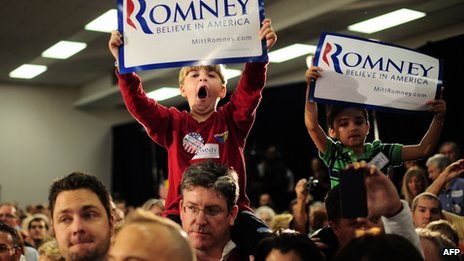 Besides the polls, Florida allows its residents to vote early. The early voting reflects the current poll numbers… Already. 😀

They haven’t even cast the first “real” vote, and Romney is already ahead by A LOT.

Meanwhile.. There is *ZERO* demonstrable difference between the Republican candidates on the most important topic, which is AMERICAN. JOBS. PERIOD!!!!

No difference at all. They all say the same thing. Less government. No rise in taxes for rich people. Fewer regulations on small businesses. Repeal ObamaCare so companies will feel confident to hire people in the near future.

That’s all well and good. That’s not even worth talking about, because they all say the exact same thing. Whether that would work or not is irrelevant. None of these candidates are offering anything that makes them stand out in the crowd, on the topic of jobs.

If you believe they do, feel free to leave a comment below, and we’ll discuss it. 😀

All I know is that if *I* don’t know the difference between their job plans, the average American knows way less, Capisce? >:D

So.. If the nomination process isn’t being decided by “How is this man going to get *ME* a job and help me feed my family and keep my house?”, then what’s deciding it? o_O

The deciding factor in this nomination process is money. Period.

The more money you have, the more negative campaign ads you can run.. Like this one:

Negativity sways the opinion of a lot of people, which is why we’ve been seeing so much bitchassedness in this process (and any OTHER election process that ever goes in in the United States of America, Republican, Democrat or otherwise).

So, if Newton Leroy says “I can get the American people jobs by firing all the government workers so we don’t have to pay their salaries anymore and we can balance the budget! :D” and I say “Newton is a FREAK-BODY who has a history of screwing more than one female simultaneously, and, according to his ex wife who used to be his side-piece until he dumped his first wife for her, dude offered her an ‘open’ marriage including her, him and his current side-piece (whom he’s now married to) when they were already married! :O”, I win.

With no difference in our jobs policies, all I have to do is talk yang about the other candidate, and I win.

This is why CREAM in politics (Cash Rules Everything Around Me).

If you have money, you can afford to send physical mail to everyone in creation so they have the forms they need to send in to vote early for you.

If you have money, you can afford to ring people’s phones all day and night with robo-calls, reminding them to vote for you.

If you have money, you can hire more people than your competitor can to do your bidding in any particular state.. In fact, While you’re campaigning in New Hampshire, you can pay people to campaign for you in Florida. Get the picture? 😀

Meanwhile, every ounce of the next candidate’s resources are going into their current campaign in the current state. By the time they win or lose there and start heading to the next location, the candidate with more money already has a nice head start on the process, and has probably flown to that state a couple of times IN PERSON to glad-hand, kiss a few babies and pose for a few pictures.

You will hear the pundits talk about “Game”.. Specifically, “Ground Game”. You have to have a ground game because someone from that area has to go around and collect signatures from people that say they want you to be on the ballot. This is why only Romney and Paul are on the ballot in Virginia, since Gingrich and Perry failed to submit enough valid signatures to qualify.

Unfortunately for the final four, Florida is too large a state for your ground game to make a difference. You just literally can’t travel from spot to spot and make an appreciable impression on people. This is why Ron Paul isn’t there.

Paul knows that the only way you win Florida is through television advertisements (see above for examples, hehe). You can shake as many hands as you want, but most people are going to find out about you by watching television, as they always do, and having a commercial come on that tells them something about the current candidates.

Paul is saving is money.. Wisely.. Because Romney has already spent $16,000,000 USD on television ads smashing Gingrich, and Gingrich has spent something like $3,400,000 USD for airtime.

In case you can’t count, that reads SIXTEEN MILLION DOLLARS has been spent just to buy up television time that informs Florida voters what Romney’s team wants them to know… Which is that Gingrich sucks.

Thanks For The Ducats

To make matters worse.. There are these things called Political Action Committees, or PACs for short, and now, there are Super PACs.

Super PACs’ money could tip balance of power in Congress

The 2010 Supreme Court ruling that allows unlimited contributions by corporations and unions has already affected the 2012 presidential campaign. But it could play a larger part in the balance of power in Congress this fall.

Voters in three states have been bombarded with television and Web advertising, automated phone calls and direct mailing, most of it directed against a candidate rather than in support of one. And in Florida, which votes Tuesday, spending is going up by the day.

Spawned by a Supreme Court ruling that loosened restrictions on independent spending by corporations, unions and advocacy groups and by subsequent rulings by the Federal Election Commission, the outside groups have the ability to raise and spend unlimited amounts of money to advocate around hot-button political issues, like support for or opposition to the Keystone XL pipeline, and to support or oppose candidates for office.

The outside groups can do just about anything a campaign or political party can do, including voter registration efforts and sending direct-mail pieces or automated telephone calls that frequently fly under the national media’s radar, but don’t have the same financial limits and donor disclosure requirements that candidates’ campaigns do.

So.. Basically.. All that “Give $5 to help Obama get reelected” or “Donate $50 towards Buddy Roemer’s campaign” stuff is mainly symbolic now.

People are sending insane amounts of money to Super PACs to support their favorite candidates.. How much influence do you think *THAT* will buy if that person gets elected? o_O

MANCHESTER, N.H. (AP) — A Las Vegas billionaire with ties to Newt Gingrich has given $5 million to an independent group backing the former House Speaker’s presidential bid.

A person familiar with the situation said casino mogul Sheldon Adelson made the contribution Friday to Winning the Future, a pro-Gingrich super PAC. The person said Adelson would spend heavily to assist whichever candidate wins the Republican nomination.

Adelson is a longtime supporter of GOP candidates and has been a friend and backer of Gingrich for many years.

Gingrich’s campaign has struggled since a super PAC supporting Mitt Romney spent $3 million on ads attacking him in Iowa.

See that? 😀 haha So you either get a million people to contribute $5 or one dude to contribute $5,000,000 and it’s the exact same amount of power to purchase the creation of and airtime for negative campaign advertisement against other candidates.

In fact, at the time of this printing, dude and his wife have dropped another $5M on Gingrich, already. 😀

At this point, the situation has stabilized. The only thing we’re waiting for is for Santorum to quit.

Everybody else is in it for the long haul.

Paul is racking up delegates so he can have some props at the Convention, so he’s going to run in as many states as he can.

Gingrich has a billionaire for a Sugar Daddy, so he has no incentive to quit.

So, it’s not really about “predictions” anymore.. It’s more like how the situation’s going to play itself out, like watching a cut-scene in a video game.

The next several states that vote are in the South. Gingrich will do well in the states where he can utilize his ground game. Romney will do well in the states where ground game can be nullified by incessant negative television attack ads. Santorum should suspend his campaign relatively soon, hopefully after Florida, because he’s strictly an 11% candidate unless he gets a religious endorsement from someplace like Iowa, where 57% of the people in the exit polls described themselves as Evangelical Christians.

So, the way I see it, this process should be a loooooong, drawn out process of getting delegates here and there, until Romney finally gets the 1214 that he needs to secure the Republican nomination.

By then, Newt Gingrich will have written the Democratic playbook for dismantling Mitt Romney’s candidacy.

He also will have created all the negative attack ads for free to Obama, since his team doesn’t have to spend any money researching, creating, airing, or measuring the efficacy of the ads.

Gingrich will also have set the stage for A LOT OF unforced verbal errors by Romney that Romney will be starring in his own attack ads, like at the end of this one, where Romney says “There are a lot of reasons not to elect me”:

So, the longer this goes on, the worse Romney looks, and the lower the chances become that Republicans will win the 2012 election.

Gingrich has now gone from calling Romney a Massachusetts Moderate to a Liberal.

Romney’s credibility (and he didn’t start out with much) with Conservatives is being eroded, daily.

That’s all that’s going to happen from now on. Gingrich and Romney are going to air incessant negative ads about each other until Romney makes his 1214 to secure the Republican nomination, and then he’s going to have to try to turn around and say “I was only kidding” to all the people he’s offended during the current process of pandering and demagoguery.

Demagogy (/ˈdɛməɡɒdʒi/[1]) or demagoguery (/ˈdɛməɡɒɡəri/[2]) (Ancient Greek: δημαγωγία, from δῆμος dēmos “people” and ἄγειν agein “to lead”) is a strategy for gaining political power by appealing to the prejudices, emotions, fears, vanities and expectations of the public—typically via impassioned rhetoric and propaganda, and often using nationalist, populist or religious themes. What qualifies as demagogy has been the subject of debate and ambiguity since Aristophanes first used the term, in reference to the Athenian statesman, Cleon.[citation needed]

Good Luck with sprinting back towards the center.. You’re gonna need it.
—